The show must go on! Educational school assembly programs are an important part of the school calendar – the children look forward to them and they are FUN! And that is something our students will need more than ever this school year.

During the COVID-19 pandemic, ALL James Wand (grades K-5) and CyberSense (grades 6-12) shows will be available as virtual school assembly shows.

Schools are operating various forms of attendance, with some students on campus and some learning remotely from home. In order to be inclusive to all students, there are TWO virtual school assembly options:

Both options are entertaining and easy for you and your school to arrange. But which one do we recommend for you?

For more information about both options including the pros and cons, please read on!

A Zoom presentation is lots of fun for the students since they become part of the show. The presenter can ask questions and involve them in the program. 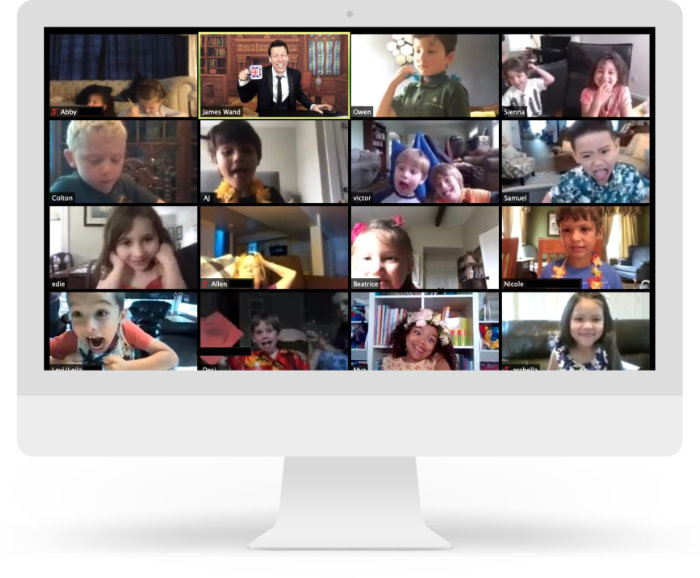 Live interaction can also be a disadvantage. Although the presenter has control over who is muted or on-screen, accidents do happen. Recently, a child was helping James Wand during a Zoom show. His toddler brother suddenly appeared in the background dancing around naked! It was hilarious and very cute, but somewhat distracting. On another occasion, a mother dropped a glass and yelled an expletive which was very clearly heard by all the other children!

There are also technical difficulties to consider. Some students – especially those joining from home – will be unable to get things to work on their end – e.g. poor wifi, older devices, lack of adult help to set up, etc. Since the show is live, if anyone has temporary technical issues, they will miss part or all of the show. The Zoom platform itself is now very reliable. Zoom bombers (an interruption by an uninvited Internet troll) seem to be a thing of the past.

The number of participants is an important consideration. Imagine the entire class watches the show together from their classroom. To the presenter, the class would then appear as a single window on the Zoom call. If the whole school joins in this way, there would be one window per class, perhaps 20 to 40 windows depending on the number of classes in each grade. If you have students joining from home, each student will appear as an additional separate window on Zoom.

A live Zoom show works best with a smaller number of participants. If you anticipate more than 30 separate windows, you should probably consider doing a pre-recorded show.

Cost is another important consideration. In order to keep the numbers on each show manageable, the school needs to book multiple shows. This makes live Zoom shows much more expensive, because if you have students joining from home you probably need to book at least one show per grade.

To the students the pre-recorded option looks and feels exactly like a live Zoom show. The presenter “interacts’ with the audience by asking questions and encouraging participation. Remember the TV show Blues Clues? The host would ask questions and give the audience a short time to shout out answers and pretend to hear the answers. 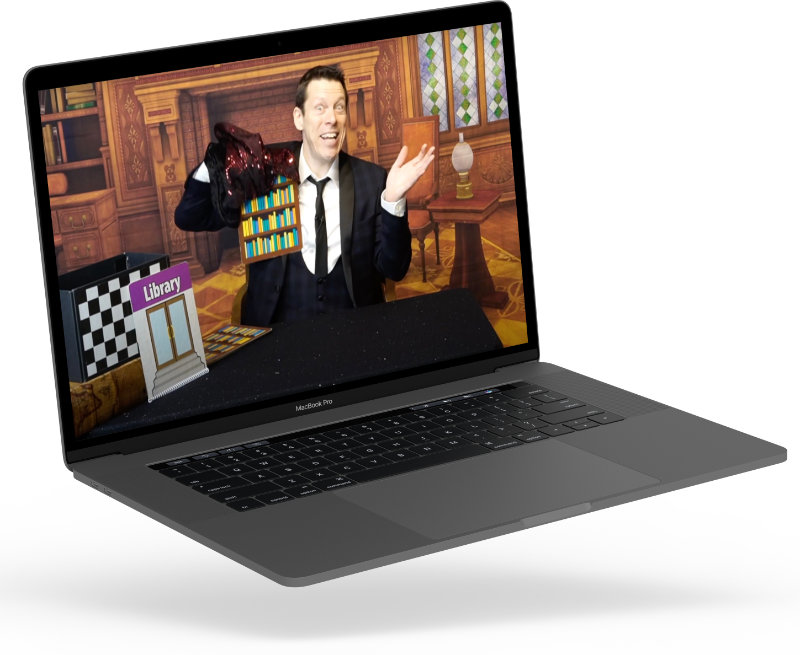 The huge advantage of a pre-recorded show for schools is that it is EASY. You don’t have to worry about technical difficulties, joining a Zoom meeting, making sure the microphone and webcam is working. All you have to do is share a web page link.

We use an embedded video system which does NOT use YouTube. Many school districts have blocked YouTube from campus wifi. Another advantage of our system is that it is ad-free. YouTube videos show ads. You have no control over the types of ads which might be inappropriate for school audiences. With our system it is completely ad-free and that means it is worry-free! Just click the big play button on the web page and enjoy the show.

The pre-recorded show is less expensive. With the pre-recorded option, you only need to book one show and everyone can enjoy watching it at a time that is convenient. When you schedule a presentation, you are provided with a web link. On the scheduled day, your show video will appear on this page. Your in-school and remote students can watch the video at any time for a 24-hour period.

This also means that the number of students is irrelevant, whether you are planning for a single class or the entire school.

A disadvantage of the pre-recorded show is that interaction with the students is simulated. Although this gives a good illusion that the students are watching a live show, it means the performer cannot do a live Q&A. In practice this doesn’t make too much difference. During the course of a live show there are only a few opportunities to take questions anyway. And a good performer anticipates the questions and incorporates them into the pre-recorded show.

Conclusion: a good quality pre-recorded show by an experienced school performer is the better option for virtual school assemblies and other larger groups.

For more information about our virtual school assembly programs, please call 214-546-5769 or click the big red button below.